Question: A converter box, an elderly TV, and a confused woman.

#1
All right, here we go. I'll try to describe my problem with as much detail as possible, without unleashing a wall of text upon you good people.

To begin with, I'll say that I live in a rural part of northeastern Georgia. Rather than strain the household's resources with satellite or cable, my dad and I have been trying to get by with a digital converter box and our old TV...an RCA 26" ColorTrak, to be precise. I bought it back in '97 when things were better.

Now, the converter box in question is a Magnavox TB110MW9. We actually have two of them, one we got when the whole "switch over" thingy was going on and one my grandmother gave us...she doesn't watch TV at all. The problem is exactly the same with both boxes...they worked great at first...then simply stopped. When you turn it on, the power light will flash but nothing will come on-screen.

We are getting a faint signal that I think is from a low-power TV station that apparently is still broadcasting in analog, since we get it even when the converter box isn't on. It's broadcasting in Spanish, so it may be one of the "translator" stations I've read of. I have wondered if setting the box to channel 3 might alleviate the problem (it was set to 4 before it quit working). However, I'd need to access the box's on-screen menu to test my theory and I can't, because it won't appear.

I've tried everything. Switching cables around. Bypassing the DVD player and plugging the box's cable directly into the back of the TV. Unplugging the box from the surge protector and plugging it directly into the wall. Cursing in one real language and a couple of fictional ones. The box's behavior suggests it's not broken...as I said, when powered up the light comes on, blinks for a moment, then burns steadily. But if it's putting out a signal, the TV can't see it.

I don't know whether the fault lies with the box itself, the TV set, or possibly a bad cable somewhere in the process. Or is this other analog station I mentioned interfering? No idea. But I am hoping it's something I can fix.

Thanks for hearing me out. I'll stop chattering now, and provide any additional information if asked to do so.

Staff member
#2
Does either the TV, or a VCR, have RCA composite (red, white, and yellow) input jacks on it? If so, try that. You can route the signal through a VCR if the TV doesn't have the RCA inputs. If it is like my parents Magnavox you have to change the sound output from RF to RCA, but try and see if you can get a picture. If not, they may be the victim of bad Chinese capacitors.

The Spanish channel is probably a low power station, not a translator. Similar, but not the same, but shouldn't be interferring with your digital reception.

Just to make sure you're getting signals, go to... TV Fool
fill out the form, and be sure to scroll down to the bottom of the form,
and give an entry for the height of your antenna Above Ground Level.

After clicking on "Find Local Channels" another screen will appear
with your reception information on it. Look toward the top of the
screen, copy and paste the bold text located in the third
paragraph into your next post here. That will allow us to view
that information with you.

Be sure to note the direction your Antenna should be pointing !
That information can be seen in the far right column of your chart.
Has there been any high wind, or other situation where your
Antenna or it's cable may have been damaged ?
Last edited: Jul 21, 2011

Staff member
#4
Do you know anyone who has a working converter box you could borrow for long enough to see if your box IS it problem?

I would first try what dkreichen1968 suggested, using the Yellow-red-white rca inputs on your TV (If it was purchased in 97, it most likely has RCA inputs on the back, on the front, or both) When you turn on your TV, make sure you change your input to "auxiliary", "aux", or something like that.

If that doesn't work, then try to borrow a converter box.

If you need a new box, try looking at a local store like WalMart that has a good return policy. I know my local Walmart has RCA 800bboxes in stock, (In store only, but they have others online) and Best But and Radio Shack usually have them in stock.
T

#5
If I'm not mistaken, both the TV and the VCR have the RCA jacks on them...I've never attempted to use them, but that's certainly worth a try.

Here is the information from TV Fool...

There are some channels listed there I don't recall being able to see, and others that I know we got before this all started are not listed. And I checked the antenna myself this morning, it is pointing in the right direction.

The thing is, we were receiving a number of channels before the problems started...quite clearly, although we at times got some very loud interference that we were never able to pinpoint. That's why I suspected the Spanish station. We've had the usual storms over the spring and summer, but nothing appears to be damaged as far as we can observe.

Potential bad capacitors, eh? I suppose that's a possibility as well, since both our own box and the one my grandmother gave us seem to have developed the same issue. The only control for the box is the remote itself...unless I'm missing something.

Anyway, thanks for the replies thus far, I'll continue experimenting.

Staff member
#6
This doesn't have to do with the converter box problem but, what kind of antenna do you have, and which direction is it pointed. The main cluster of signals seem to come from about 200 degrees from magnetic north (south south-west), those are weaker than some in your area, but they should be receivable with the right antenna.

Staff member
#7
If I'm not mistaken, both the TV and the VCR have the RCA jacks on them...I've never attempted to use them, but that's certainly worth a try.
Click to expand...
Even if your converter box is bad, if you get a new one you would do well to connect to the RCA inputs. It results in better picture and sound quality.

Can you tell us what analog channel that Spanish station is on?

Your TVfool results aren't great, but you should be getting something. The fact that you do get a signal from an analog channel leads me to suspect either:

1. Poor connection or bad cable. Check all your connections, and look for wear and breaks in the cable.

2. What I really suspect is the converter boxes. If all else fails, buy a new one. If that fails to solve your problem, return it to the store and we'll brainstorm some more.

Can you tell us what kind of Antenna you have ?
If not, can you take a picture of it, and post it here ?

You've said that it is pointed in the right direction...
Sometimes it's hard to tell if that is actually true.
Do you have a Compass, and check which direction it actually is set on ?

A few years ago I chased my own tail in circles trying to determine what was wrong with my setup, later to discover my converter box was at fault. If you can't find one to borrow for testing, you may be able to find replacements (cheap) at a garage sale, Church bizarre or Thrift Shop.

Can you tell us what kind of Antenna you have ?
If not, can you take a picture of it, and post it here ?

You've said that it is pointed in the right direction...
Sometimes it's hard to tell if that is actually true.
Do you have a Compass, and check which direction it actually is set on ?
Click to expand...
Hmm, I don't have a picture handy, here's one I found online... 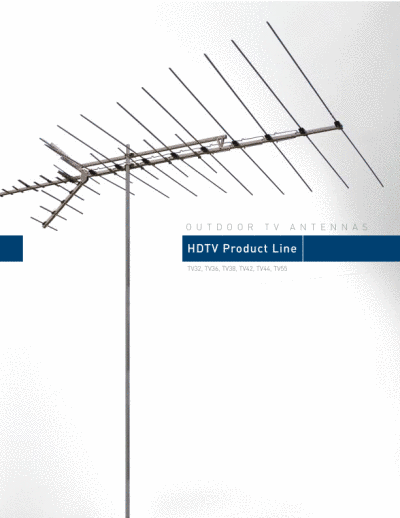 And yes, according to the compass I used, it's pointing in the proper direction...and it certainly seemed to be working before all this started, which is leading me to suspect the boxes themselves or perhaps the cables.

Thank you again, I'll keep trying and checking back!

Thank you for being so patient, often times these things do take a while
to resolve.

From the Picture you attached, it appears that type antenna will receive
the necessary frequencies for what is shown on your chart. Most of your
stations are in the UHF range, save for one, which is Hi-VHF, that being
your KGTV PBS on Channel 8.

But, given it's direction and distance from you, it may be better to
disregard it for now, and focus on your 164° Azimuth. I would hope
that your Antenna has a Boom Length of at least 60" to comfortably
"reach" out for those stations from 30 to 45 miles.

Ha, just to make sure we're on the same page, I have made some
additions to the picture you offered, showing the proper orientation
of that type antenna toward the location of transmitters.

Hang in there, we'll figure this out :applause:

#12
Thank you, SWHouston. I was on my way to work yesterday morning and in quite a hurry...I pulled up antenna images on Google and looked until I could say, "Yeah, that's ours!" We have it pointed correctly (it's been years, but I seem to recall looking up the proper direction and so forth online when we first got it), and until this issue started it was working quite well. We got a lot of stations, including a PBS station on 8.

I'm curious: could the set's age be a factor? It was made long before all this digital jazz started.

I do apologize for "re" stating things like direction. Often times we say things, and until someone actually comes out with a specific number, there is a little doubt. Glad you didn't take that wrong.

Antenna age...
To a point. Depends on how much corrosion occurs. Many times, one can go up to the Antenna, swing the Rods in and out (refresh the contacts) just look at it closely and make sure things aren't loose.
But, you did say it had been up a while.

Any component can age, and there's a thing called a "Balun" up there, which converts the Antenna where it can be used with Coaxial Cable that may be getting a little weak. IF you were to change it out, one would be wise to replace the Coaxial Cable at that time as well. That can make a considerable difference in reception.

Usually, the failure of two similar or identical components in a system points to something else, in this case toward your antenna, coax or balun. If water entered your coax it can 'mute' or attenuate your TV signals and if that water froze over the winter, it can 'kill' the coax. The same thing applies to your balun which is the small device that changes the coaxial cable to the two wires that are attached to your antenna.

On the other hand, some brands/models of Converter boxes have an awful reputation for failing and you may have had two of them fail at the same time. That's why we suggested trying a different 'known to be good' converter box, first.

What are you using to divide or split the signal from your antenna to your two converter boxes? Is it a common "splitter" or "diplexer" and is it mounted inside or outside? If outside, could water have entered the coax at those fittings? Water entry doesn't have to be from rain ... my neighbor flooded their own basement with their new yard sprinkler system!