#1
There was some BIG money being moved for this!

Dish Network won all 176 licenses available in the FCC&#8217;s H Block auction with a combined winning bid of $1.56 billion.


The auction closed Thursday, more than a month after it started. Considering Dish was the highest profile bidder involved in the auction and that bidding stopped precisely on the reserve price the FCC set and Dish promised to meet, it&#8217;s not surprising to see that Dish controlled the whole auction.

Dish last year promised to bid at least $1.56 billion in the H Block auction and in return, it petitioned the FCC for waiver of certain technical rules governing its AWS-4 spectrum, as well as additional time in deploying a network on that spectrum. Dish requested up to 30 months to designate its AWS spectrum for uplink or downlink.

While Dish further enriched its spectrum portfolio, the FCC applauded the incoming funds for FirstNet.
&#8220;With this successful auction, the Commission makes good on its commitment to unleash more spectrum for consumers and businesses, delivering a significant down payment towards funding the nationwide interoperable public safety network,&#8221; FCC Chairman Tom Wheeler said in a statement.


But Dish has not yet made clear its plans. Dish declined to comment on the auction and what it intends to do with the spectrum.
Dish Chairman Charlie Ergen recently confirmed he has no intentions of entering a bidding war with SoftBank and Sprint for T-Mobile. A T-Mobile acquisition would give Dish access to the infrastructure it needs to deploy wireless broadband services on its spectrum. But after its failed attempt to disrupt Sprint&#8217;s bid to acquire Clearwire and SoftBank&#8217;s bid to acquire Sprint, Dish is understandably gun shy.


Talks of a Sprint bid for T-Mobile has cooled in the face of a chilly regulatory reception. But one possibility thrown out for a way around anti-trust concerns was a network sharing agreement between the companies and Dish. That plan would essentially prop up Dish as a replacement fourth carrier in the U.S. market and give Dish a network for its airwaves.
Dish has recently entered an agreement with Sprint to deploy fixed mobile broadband on a trial basis in Corpus Christi, beginning mid-2014. The trial will involve Dish installing outdoor or indoor routers that will take advantage of Sprint&#8217;s deployment in the 2.5 GHz band, a swath of spectrum that originally belonged to Clearwire.

#2
Ahh...the FCC auction report if you are interested. I wonder what Dish is going to do with all this opportunity? It looks like they could get into cell service. 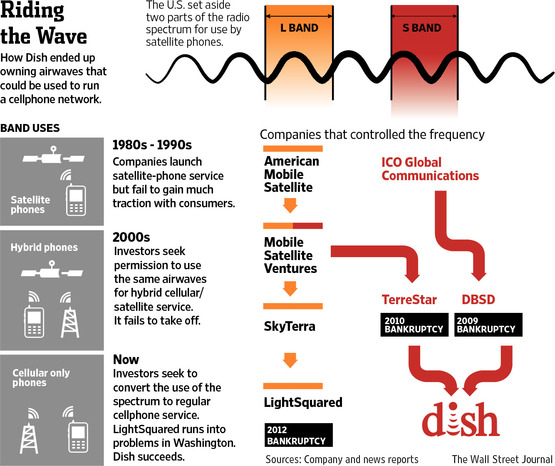